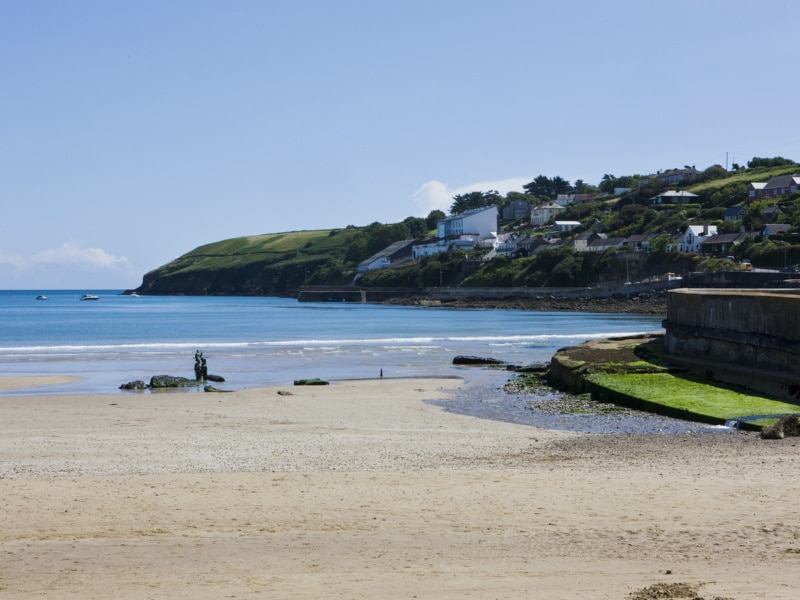 Ardmore is the oldest Christian Settlement in Ireland, founded by St. Declan circa 416 AD., before the arrival of St. Patrick. St. Declan’s feast day is celebrated on ‘Pattern Day’ every 24th of July. The village is most picturesque and its neatness has won Ardmore many awards, including the national title in the Tidy Towns Competition. Ardmore boasts a wide range of accommodation and so is a most pleasant place to stay and enjoy the fun in the pubs and the excellent food in the restaurants. Visitors have five lovely beaches to choose from.

The Round Tower and Cathedral overlook Ardmore Bay in a beautiful elevated position above the village and is the site of St. Declan’s monastery. The 12th Century Tower is 29m high and is the best example of an Irish Round Tower. The carvings on the West Gable of the Cathedral are special to Ardmore and depict Biblical scenes as well as scenes from the early Christianisation of Ardmore The Beannachan, St. Declan’s Oratory, is the reputed burial place of St. Declan and is the oldest building in the monastic site.

If the mood and the day match, take the lovely cliff walk, a 5k waymarked way which takes about 1 hour to walk. This is a circular route which runs by Ram Head passing the Coastguard Station (1867), the Castle (1867) the Lookout Post (1940) used during World War II by coast watch personnel to log all ships and aircraft which passed. It had a telephone connection to the village post office. Further on is Father O’Donnell’s Well, built by a Mr. Rahilly in 1925 who found the waters of the well to have great curative properties especially for eye ailments.

At the beginning of the cliff walk is St. Declan’s Well which served as a Baptistery to the primitive Christian missionaries Nearby is St. Declan’s hermitage where Declan retired for greater seclusion to a little cell which he made himself at the spot where now is the ruined church beside the Holy Well. A map with a reference guide is available free of charge from the Ardmore Tourist Office which operates daily from 11am-5pm.

Another walk of much longer duration is St. Declan’s Way. This is a modern Waymarked walking route from Ardmore in Co. Waterford to Cashel in Co. Tipperary. It crosses the Knockmealdown Mountains via a high (537m.) pass – Bearna Cloch an Bhuideil. The Way is 94 Kilometres, (56 miles) in length.

There are historic links between St. Declan of Ardmore and Cashel, seat of the Kings of Munster at that time. Cashel became an important religious site in the 11th Century and there is a tradition of pilgrimage between them. Pilgrims on foot followed the trading routes of the day; in this case parts of St Declan’s Road, Casan na Naomh (Path of the Saints), Bothar na Naomh (Road of the Saints) and the Rian Bo Phadraig (Trach of St.Patrick’s Cow). The modern St. Declans Way is as faithful as possible in following the route of these ancient highways.

In November, 2014, Ardmore was a joint winner in Category 2 of the IPB Pride Of Place Awards. The following is an extract from the Pride of Place Awards Website, here’s what they had to say about Ardmore:
Between Dungarvan and Youghal you’ll come upon the award-winning village of Ardmore just off the N25. Wrapped around a long sandy beach the picturesque village is steeped in history being one of the oldest Christian settlements in Ireland. It is also renowned for its fine 12th century Round Tower, a perfectly proportioned monument to Irish monastic life. St Declan brought Christianity to the area before St Patrick came to Ireland and his feast day is “Pattern Day” every 24th July. Ardmore now has the famous Pattern Festival in July, which draws crowds from all over Ireland with a weekend of music and entertainment throughout the village. Ardmore caters to its thriving tourist industry with pubs, restaurants and the best in Irish art, pottery and crafts in the Ardmore craft shops displaying local and Irish talent. Vibrant local clubs and committees work together to make Ardmore an attractive destination in which to live and to visit.
Ardmore was also ‘Commended’ in the presentation of Ireland’s ‘Top Tourism Town’ in the Small Town Category of the Tidy Towns/Fáilte Ireland ‘Tourism Towns Award’ 2014.
Judges’ Citation:
The judges’ visit started with a meticulous and informative presentation. There was an excellent degree of organisation on the day with a fantastic exhibition of community pride, culture, environment, heritage and care for the people. As a demonstration of community cohesiveness and collaboration with the various agencies, in particular the local council, this entry was second to none. The approach of rebuilding a traditional festival to an event that brought great benefits to the area and as a vehicle to get community organisations to work together is especially praiseworthy. The judges attest that the visit to the beautiful seaside village of Ardmore was memorable in so many ways.

Ardmore was also ‘Commended’ in the presentation of Ireland’s ‘Top Tourism Town’ in the Small Town Category of the Tidy Towns/Fáilte Ireland ‘Tourism Towns Award’ 2014.