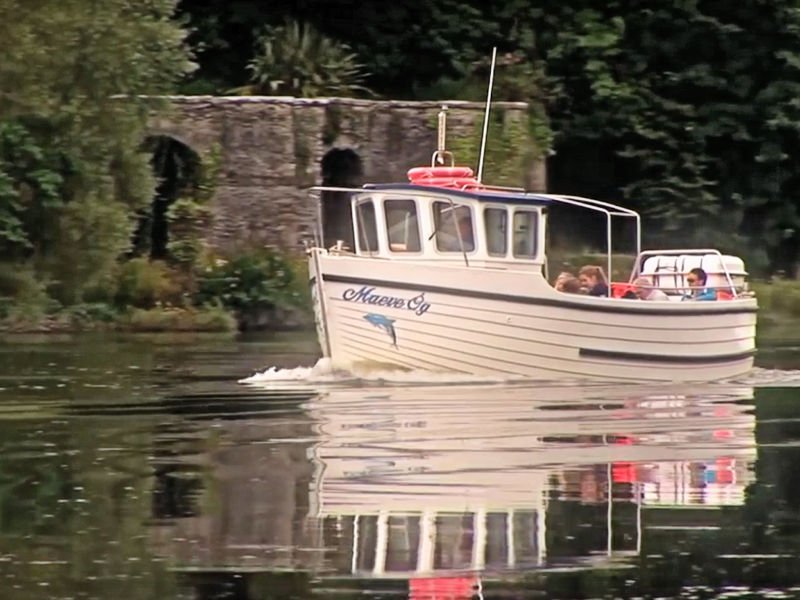 Blackwater Cruises operate daily between May and September.The best way to book your cruise is to call Tony Gallagher on his mobile phone. To ensure your cruise is booked for the time that suits you best, just give Tony a ring anytime.

The Tour
We leave from Youghal jetty and travel North up the River Blackwater, past Rhincrew and towards the old bridge and the remains of Templemichael Castle. Passing Molana Abbey on the left, we enter a tranquil, unspoilt area of natural beauty, as yet untouched by urban development. The tour lasts approximately 90 minutes subject to weather and tides.

The Boat
‘Maeve’ is a 28ft half-decker fishing boat painted white, orange and blue. She was originally used as a passenger boat in Dingle Bay, Co. Kerry, for bringing people out to see Fungi the Dolphin but Maeve has now settled into her latest role as a ferry for those who wish to sample the hidden delights of Cork’s River Blackwater. Maeve is Captained by Tony Gallagher and his first mate, Pharaoh.

The Blackwater
The Blackwater or Munster Blackwater (as Gaeilge: An Abhainn Mhór, The Great River) is a river which flows through counties Kerry, Cork, and Waterford in Ireland. It rises in the Mullaghareirk Mountains in County Kerry and then flows in an easterly direction through County Cork, through Mallow and Fermoy. It then enters County Waterford where it flows through Lismore, before abruptly turning south at Cappoquin, and finally draining into the sea at Youghal Harbour.