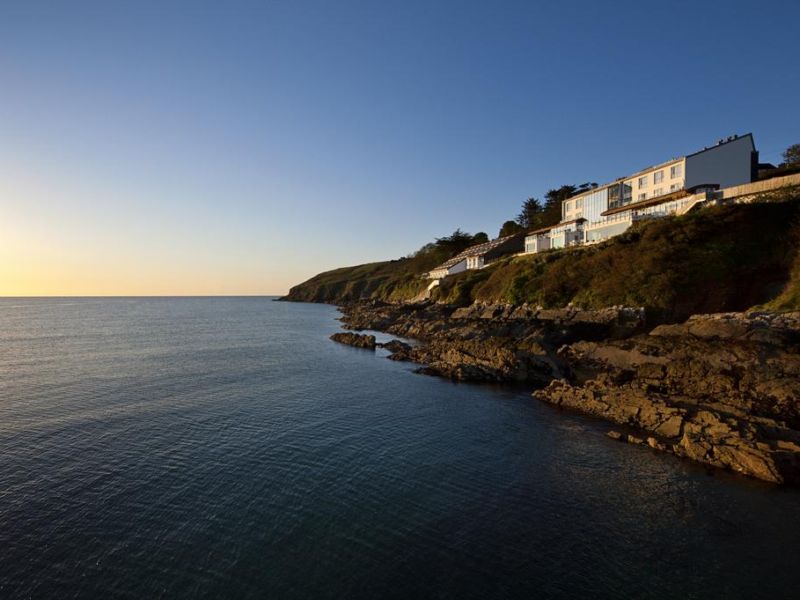 A very special light has been lit on the border of the Cork-Waterford coastline. Cliff House Hotel is a stylish hideaway offering a unique, 21st-century take on the intimate sea-side hotel of yesteryear. Steeped in history and carved into the Irish coastline at Ardmore fishing village, the Cliff House is a chic boutique hotel, full of personality and signature ocean features.

Managed by Adriaan Bartels, formerly the General Manager of Sheen Falls Lodge, Co Kerry, Cliff House is like no other hotel in Ireland. With its imposing granite stone façade, the entrance to the hotel acts as a gateway to the breathtaking vista of Ardmore Bay, rolling out to the Irish Sea. The panoramic sea view seen through the floor to ceiling windows makes one momentarily feel like a passenger aboard a luxury liner.

Service is friendly and extremely relaxed. It’s restaurant, The House Restaurant, headed up by CLIFF Executive Chef Martijn Kajuiter, will no doubt be a gourmet haven. The jewel in the crown of this luxurious hotel is its expansive terrace which extends onto landscaped gardens and offers unbroken ocean views, ideal for all-day dining and entertainment.

Cliff House is a virtuoso building with a difference. The cleverly designed interior draws the landscape inwards using natural materials and warm and inviting furnishings which create an extremely relaxing and luxurious environment. A palette of deep marine blue, fuchsia, aubergine and sea green instantly evoke the surrounding coastline and countryside. Interestingly, the hotel houses the largest private collection of antique Campaign furniture in Ireland.

Bedrooms
Bedrooms are akin to secluded beach residences, each with their own private terrace overlooking the sea. The bespoke rooms are styled with Campaign antiques and oversized furniture upholstered in modern linens and tweeds. Beds are back lit with unique headboards designed by a number of local artists using indigenous Irish materials such as linen, glass and dried petals.

Rooms at the Cliff House Hotel range from Cliff veranda suites to Terrace suites and luxury doubles, all featuring Wi-Fi and flatscreen TVs.
The bathrooms are a real treat to the eye with luscious coloured mosaic tiles and vibrantly coloured glass, which smartly contrast with the granite grey stone characteristic of the hotel. Etro luxury bath products sit easily atop the egg-shaped floor standing baths; while in the veranda suites, guests can shower quite literally under the stars as the enclosed glass surround extends onto the balcony.

Food
The House Restaurant will inevitably become a gourmet retreat for food connoisseurs who want to take a culinary journey that culminates in a truly magical dining experience. Head chef Martijn Kajuiter has worked with many Michelin star chefs in the past including Marco Pierre White in The Restaurant at The Hyde Park and Pierre Koffman of Le Tante Claire. Prior to joining Cliff House Hotel, Martijn was Head Chef at Restaurant De Kas which is one of Amsterdam’s most exciting and successful restaurants.

The House restaurant offers a seasonal menu where only the freshest and finest food is served – perhaps lobster caught that morning, crab from the bay or locally reared meat served with home grown vegetables. Martijn is passionate about sourcing food locally and has already established an organic vegetable garden with St Raphael’s Centre in Youghal. The Chef’s table seats 18 diners and is adjacent to the restaurant. Children are well catered for with early suppers prepared from fresh and seasonal produce.

Leisure And Beauty
The serenity of the sea is carried through to The Well Spa making it a tranquil retreat for guests. The family-sized swimming pool virtually disappears into the sea with only a glass wall separating the two. The surrounding floor is made of smooth, pebble stones reminiscent of the sandy Irish coast-line.
The Well Spa also features an outdoor Jacuzzi, sauna, steam room, fully-equipped gym and three treatment rooms where expert therapists work their magic. The restorative nature of the Voya organic seaweed products or the luxury of an Ann Semonin facial can be enjoyed whilst basking in soulful views over the Irish Sea.

Outdoor
For outdoor activities few will be able to resist the lure of the sea that can be accessed directly from the hotel via a private pontoon, a first for an Irish hotel.
A gentle stroll on Ardmore Beach can be followed by the cliff walk or an exploration of the historical Round Tower and St Declan’s Well which mark Ardmore village as the oldest Christian settlement in Ireland.

Organised water activities can be arranged by the hotel including water-skiing, deep sea fishing, windsurfing, kayaking, scuba diving and sailing. Golf enthusiasts can be assured tee-times in nearby award winning courses such as Dungarvan Golf Club, Fota Island in Cork or The Old Head, Kinsale.
The Cliff House Hotel is a retreat for all seasons whether it is time spent in winter curled up by the fire as waves crash against the rugged coastline, or basking in the summer sunshine whilst sipping refreshments on the terrace.

The old Cliff House Hotel served the historic village of Ardmore for 80 years; the new Cliff House is as true to those roots. It is a complete hide-away where you can escape to your room where the only sound you will hear is the sea lapping at the shore. It’s perfect!