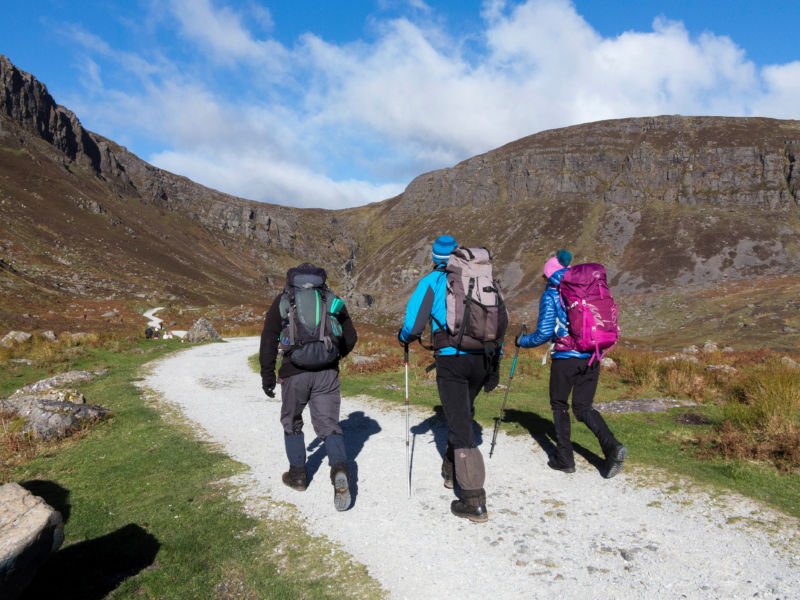 The Comeragh Mountains are a remarkable and varied range, stretching from the coast near Dungarvan inland as far as Clonmel. The central part of the Comeragh Mountains features a boggy plateau, while the fringe features phenomenally rocky coums filled with a wonderful assortment of little Loughs. Here you will find the rock-walled Coumshingaun and Coum Iarthair, as well as Crotty’s Lough, which was named after the outlaw who lay low in these remote fastnesses. Other deep hollows include Coumstillogue, Coumalocha, Coumfea, and Coumtay. Searching for them all can make for some interesting explorations. (O.S. Discovery Series Map no. 75 covers the area with great detail) A network of forest tracks offer easier walking.

Coumshingaun Lake Walk
Short Walk: 2½ Ml. (4km)
Time: 2 ½ Hrs
Ascent: 250m
This lake is a superb example of a corrie lake and well worth the ascent.This walk commences at Kilclooney Bridge on the R676 Dungarvan/Carrick-on-Suir road. The Ire River from the lake crosses under the road at this bridge. It is possible to park on a side road to the right just before the bridge. Cross the road to Comeraghs side, go through a gate, and negotiate a wet patch near the river to get onto a grassy path which will bring you all the way up to the lake. This completes the shorter version. On a clear day this lake with the cliffs on three sides is a wonderful sight. Soak in the atmosphere and return at your leisure.

Full Walk: 5Ml (8km)
Time: 5 Hrs
Ascent: 700m
If taking in the full walk, the hard work now begins. Walk to the steep spur going up the left (South) side of the corrie, where you will observe a clear ridge path. This becomes narrow and weaves up between large boulders in parts and involved some scrambling now and again-great care is needed. Observe the wonderful views down to the lake and behind is a wide sweep of West Waterford. Above the boulders the path is still clear and there is a final very steep ascent on a heathery section where great care is again required, before you reach the plateau. Detour a few hundred metres to the left, if you wish, to the cairn, which is the highest point of the Comeraghs, Fascoum (789m) and now resume your clockwise circuit around the corrie. You next ascend a grassy local top called Staicin (704m), and from here, your descent route is down Eastward along the obvious spur. On the descent it is necessary to be careful as you negotiate you way along and between large boulders. This terrain gives way to a steep grassy section – take care not to leave the spur too early and end up on steep ground over the lake. Pick up the grassy path again to return to the start.

The Mahon Falls And Coum Tay
Distance: 11km
Time: 4 Hrs
Ascent: 400m
The falls may be reached by turning west off the R676 (Dungarvan/Carrick-on-Suir road) at Mahon Bridge. Take a right turn immediately by a shop following the signs for ‘Comeragh Drive’. Continue on for about 1 ½ km turn right and travel inwards having the Mahon river on your right. There is parking on your left close by the pathway to the falls. The base of the falls is an ideal picnic area and having enjoyed the scenery you may return to the parking area by the same pathway.

The more adventures walker may wish to continue to Coumtay. Cross the river above the falls and head up-hill in a south-westerly direction over a wide plateau with the Mahon tributaries draining down from the marshes. The area offers some fine views- Knockaunapeebra is behind with the Waterford coastline and Dungarvan bay to the south.
Further along the route you will approach the narrow neck where the cliffs of Coumfea to the north and Coumtay to the south are only a few hundred metres apart. Turn in the direction of Coumtay. Circle around the edge of the cliffs and only begin to lose height when you reach the far end of the southern encircling spur. When you drop down to the end of the spur turn left and cross the valley by the ruins of an isolated house. Walk uphill along the forest edge and back along the road to rejoin your car.
YouTube Video: Mahon Falls

Crouhan Walk
Distance: 2.4 km
Time: 1 Hr
Ascent: 150m
From Dungarvan take the N25 to Lemybrian. Follow the signs for ‘Comeragn Drive’ on roads heading west or northwest. Cross Dalligan bridge and park at the top of the road a few hundred metres beyond a large layby. The views from here are superb- Dungarvan town and Helvick head to the south. The cliffs from Tramore to Youghal seem very close.