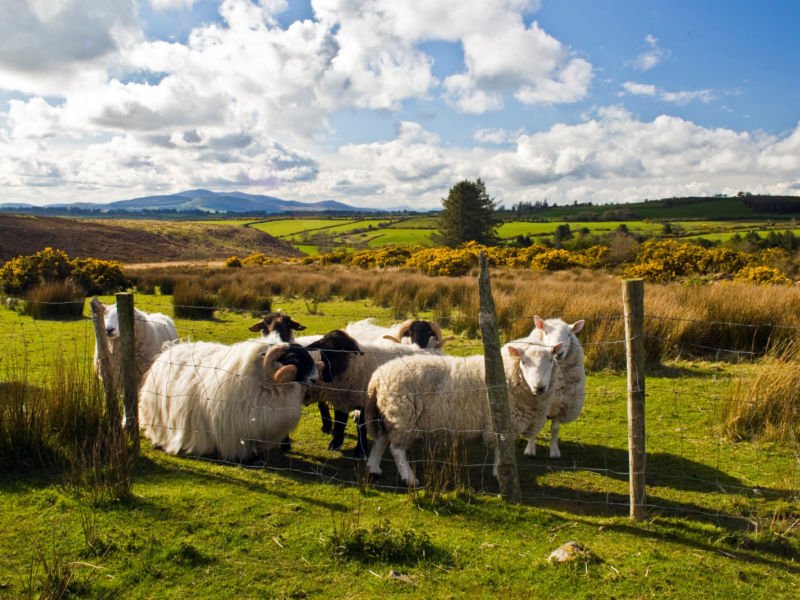 This walk takes the south facing slope of Cruachan Hill. This hill has two advantages, being close to the coast in the south and to the Comeragh Mountains in the north. The summit, on a clear day, affords a breathtaking 360 degree view of the coast from Youghal to Tramore, the Knockmealdowns to the north-west and the Comeraghs to the north. The walk is over paths, forest roads and quiet country roads. Some of the paths are quite rugged and good footwear is advisable. This is a good walk in late summer and autumn, when the common ling and bell heather are in bloom and paint the landscape in a blanket of mauve.

Location:
About 4 miles due north of Dungarvan. Take the N25 from Dungarvan towards Waterford and turn left just after the end of speed limit signposts. Continue straight at the first junction, then right at the second one. The beginning of the walk is at the next junction.

Directions:
The walk follows a boreen for about 0.5 mile and then a forest road to the right of a pine plantation. This road soon passes within the plantation boundary with trees on each side. When it emerges in the open, the track veers left following the northern boundary of the plantation witha stone wall and a ruined house to the right. The track turns right following the wall then left after 50 yds/45m. It intersects with a new forest road which it follows to the right. Turn off this road before the mast up ahead is reached, where the track bears left over a wooden stile and climbs sharply to the summit. The return journey descends by the path or firebreak to the north (right) of the mast and reaches the forest road again. It follows this south for about 0.5 mile/800m where an intersection is reached. The new road turns left to climb towards the summit, an older road continues downhill to the south. The track continues south on this older road and soon turns left onto a grassy farm boreen lying between a stream and a fence. Two gates are crossed before the track leads downhill over open heather. It reaches a public road, turn left to return the starting point.