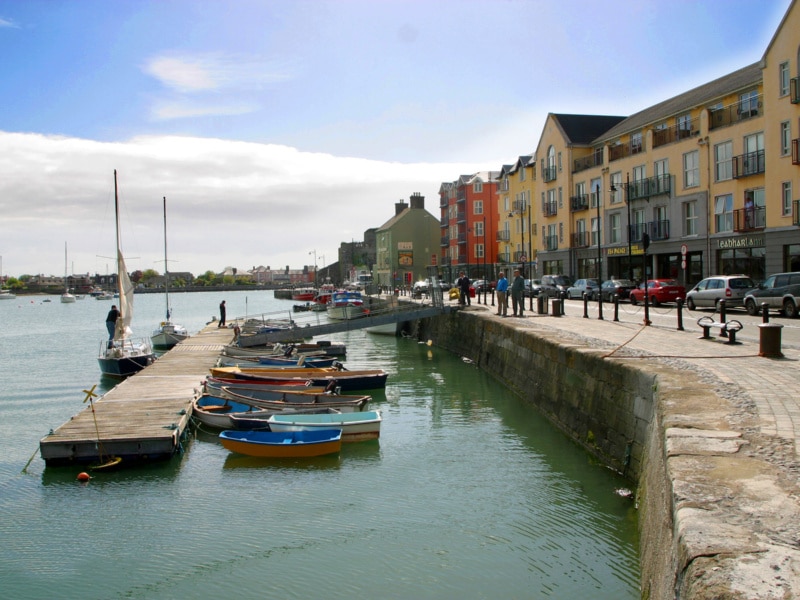 Dungarvan is a bustling seaside town and the administrative centre for Co. Waterford. Its harbour lies on the River Colligan where it widens and enters the sea. It is an excellent holiday centre with good amenities, ideally placed for touring West Waterford. The town’s origins can be traced back to the 3rd century a.d. when a tribe called the Deise settled in the area, the surrounding region still bears this name. Dungarvan derives its name from St. Garvan, who founded a monastery here in the 7th century.

Augustinian Priory, Abbeyside
In Abbeyside, the town’s eastern suburb, are the well preserved ruins of the Augustinian Priory founded in the 13th century. The sixty-foot high square tower, resting on groined arches, was adapted as a belfry for the adjoining Catholic church. A tomb beneath the east window of the priory bears the inscription ‘Donald McGrath 1490’.

Devonshire Bridge And Grattan Square
The picturesque Devonshire Bridge linking Abbeyside with Dungarvan owes its origins, as its name suggests, to the industrious Dukes of Devonshire. The building of this single arched bridge took place between 1809 and 1816. The rusticated sandstone used in its construction was imported from England and the records show that landowners affected by its construction received compensation. Grattan Square was constructed between 1806 and 1826 at the instigation of the Duke of Devonshire. The architecture of the square has changed little to this day.

The Lookout
By the 1870s Dungarvan had become a popular destination for seaside holidays. It was especially favoured by the wealthy farmers from nearby Co. Tipperary, who came every autumn to take in the sea air. Situated close to the castle were Stokes Baths, which filled with salt water at high tide; it was here that many visitors to Dungarvan spent their time. In an attempt to develop the appeal of Dungarvan as a seaside location the esplanade was built towards the end of the 1800s. This became known locally as ‘the lookout’ as the wives and families of the fishermen would look out to sea from the esplanade and await the safe return of their loved ones. In 1895 the park was developed near the lookout and shortly after its opening the bandstand was erected. Many a tourist and local wiled away the summer nights listening to the brass bands that performed here. From the lookout the visitor’s eye is drawn to the Ring/Helvick coastline and the Cunnigar (An Coinigéar), a narrow peninsula that projects into Dungarvan Bay and is a haven for seabirds.

The Old Market House Arts Centre
Turn left off the 19th-century Grattan Square into Main Street, walk to the end and you will find the Old Market House Arts Centre. This building started life as a butter market in the late 1690s. The area in front of the building became known as the market place. Overhead were the Council chambers. In 1868 the Market House was bought by Robert A. Merry, a local business man, who used it as offices and stores for his grocery and spirits business. The area in front of the Market House is reputed to have been used for public executions. In 1984 the building was restored and for many years housed the town library and museum. Today it is an exhibition space for local artists.

Dungarvan Town Hall Theatre And Museum
The foundation stone of the town hall was laid by local MP William Villers Stuart in 1861. A curious, large window in the shape of the rising sun formed a focal point for the many concerts, dances and meetings that were held here. Today the town hall is used by Waterford County Museum to mount exhibitions on various aspects of the town’s history. The town theatre is housed upstairs and holds regular concerts, plays and events.

St Mary’s Church
St Mary’s Church (Church of Ireland) was designed by George Richard Pain in 1828. It is a simple building with Gothic-style windows. In the adjoining graveyard are some unusual features. One of them is a wall with five circular openings. Local folklore suggests that this was possibly a leper hospital; it was through these holes that the townspeople passed in food to the sick. It is more likely that it is the gable wall of an earlier church.

St Joseph’s Hospital (Dungarvan Workhouse)
Built between 1839 and 1841 by George Wilkinson in the Tudor and Elizabethan style, it housed 600 inmates. Today for many people coming to the town in search of their ancestors this is a good starting point. Behind the hospital is Father Toomy’s Well. Father Toomy, an Augustinian priest, is said to have blessed the dead inmates of the workhouse with holy water from the well before they were buried.

Davitt’s Quay
The present quay dates to the re-planning of the town in the early 19th century by the fifth and sixth Dukes of Devonshire. However, since then, it has undergone many changes, possibly none as striking as the most recent, which saw the redevelopment of a number of derelict stores and warehouses along the quayside into a modern, cosmopolitan residential and commercial centre. It is the colourful vista of the ebbing of boats in the harbour at high tide, with the backdrop of the Comeragh Mountains, that greets and remains uppermost in the mind of visitors to Dungarvan today.

For activity holidays Dungarvan is an ideal base for fishing and golfing. There are a few championship golf courses in the locality and the fishing is perfect with the River Blackwater and Suir close by as well as the trout fishing in Cappagh Lakes. Deep sea fishing trips are available from Dungarvan harbour too.
You can hike through The Comeragh Mountains or avail of the walks near the town in Colligan Woods, the Cunnigar or the Cruachan and Famine Walks which are all mapped out for you. See birdlife, wildflowers and the amazing scenery of the area up close and personal.
The cycling routes range from 83km to 32km and can take you through the Comeragh Mountains, Nire Valley, the Gaeltacht An Rinn overlooking Dungarvan bay and many other villages around the area. The Sean Kelly Tour makes the town its home each August. For those who want to take it at a more leisurely pace, there are several driving routes well signposted throughout the beautiful area.

North-west of Dungarvan on the junction of the Clonmel and Cappoquin roads there is a limestone monument commemorating the celebrated coursing greyhound Master McGrath, who won the Waterloo cup three times between 1868 and 1871 and was only beaten once in his career. Eight kilometres south of Dungarvan is Ring, or An Rinn , an Irish-speaking village with a language college.