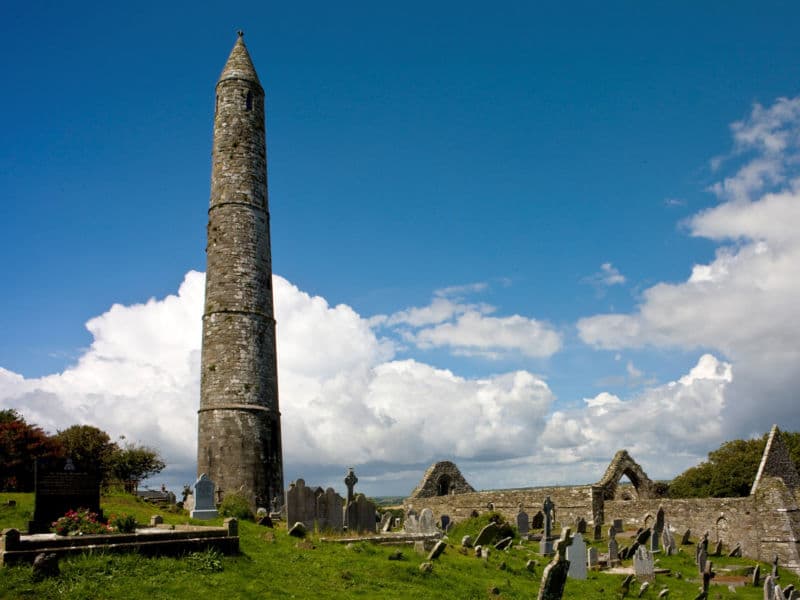 Leave Dungarvan heading west on the N25 towards Cork. Turn left on the R674, signposted An Rinn (Ring) and continue until you reach An Rinn, which is the smallest coastal Gaeltacht area in Ireland. Here you will find Coláiste na Rinne, an Irish language college founded in 1909. It attracts students at all levels and runs full-term (academic year) and summer courses in the Irish language. Visit Criostal na Rinne, a crystal-making workshop with a showroom attached. Here, the old village of Ballynagoul takes you back in time, a visit to the local pubs is a must. A blazing turf fire is the backdrop for a lovely evening of traditional music. Further out on the Ring peninsula, on the R674, is Helvick Head and to the north the long sandy spit called An Coinigéar (Cunnigar). There are good walks to be had in both these areas.

An Coinigéar Walk – Distance: (11 km) 2 hrs
The walk starts at Mooneys Pub, which can be found on the R674. From Mooneys walk down the hill around the bend and pass a disused cemetery on you left. Turn right at the T-junction heading towards the college, which you will pass on your right. Now the road meanders along with the bay on its right until you come to the entrance to An Coinigéar, this is a sideroad that leads down to the sea, where there is a car park. There is a river to the left of the sideroad and a plaque saying ‘An Coinigéar’. Follow the curve of the shore out to the long sandy spit that sticks out into Dungarvan Bay. Try to walk as far as the highest sand dunes to capture the full flavour of the walk. The walk is memorable for its views to the Knockmealdown and Comeragh Mountains and to Helvick Head. It is an excellent place for bird-watching as many different seabirds can be seen in this area.

Helvick Head Walk – Distance: (7 km) 2 hrs
The walk starts at Mooneys Pub on the R674. From Mooneys walk uphill past the tennis courts and stay on this road all the way to Helvick Harbour (3 km). There are fine views over Dungarvan Bay. Walk straight on keeping the obelisk on your left, then turn right after you have walked past the college. Turn left at the junction and follow a level narrow road until you think you are entering the gate of a private house. But just at the gate turn right onto a stony path, this takes you over a stile onto open ground. Walk up the steep hill keeping the furze on your left to reach the summit. There are excellent views from here. When ready, retrace your steps back to Mooneys.

Mooneys Pub To Ardmore
Retrace your steps on the R674 back to the coastal drive en route to Ardmore (Aird Mhor), where you will join the R673 which will take you into Ardmore. To the left you will pass three very popular beaches: Ballyquin Strand East, Ballyquin Strand West and Ardmore East. Ardmore, a historic seaside village, is not only a deservedly popular seaside resort, but also the site of a 7th-century monastic settlement founded by St. Declan. As you approach the village there is a plaque commemorating Ardmore’s win as the ‘Tidiest Village in Ireland’ a few years ago. Turn left onto the main street, which still has some thatched houses, and continue along to the seafront at the end. To the left you have a seasonal tourist information office. Ardmore has good eating places and a wide range of holiday accommodation: hotels, guesthouses, farmhouses and self-catering holiday homes. There is plenty of music in the pubs most weekends in the summer. Details may be obtained from the tourist office. You will love this village and its colourful atmosphere. One of its best known residents was the popular novelist Molly Keane.

Continue up the hill towards the famous cliff walk and you will see on your left St. Declan’s stone. When St. Declan arrived here from Wales, some 30 years before St. Patrick, his bell and vestments were miraculously borne across the water by a glacial boulder, which now lies on the beach. The rock is said to promise wondrous healing powers for all agile enough to creep beneath it. As you continue up the cliff road you will find Ardmore Pottery and Craft Gallery. Over one hundred of Ireland’s leading craft workers exhibit here. The Cliff Walk begins just after the Cliff Hotel¹s car park. Follow the road to where it becomes a path leading down to some ruins. You have arrived at St. Declan’s Well, where converts were baptised, and at the remains of an old church.

The Ardmore Cliff Walk – Distance: (5 km) 1 hr
The Ardmore Cliff walk takes you around Ardmore Head and Ram Head passing the shipwreck known as Sampson. On your right you will see the coastguard station (1867), the castle (1867), the lookout post, used for observation during World War II, and Father O’Donnell’s Well. Now the path follows a series of bends away from the sea and arrives, via a gate, at the end of the lane. Follow the road up to a T-junction and continue straight on until you reach the 12th-century Round Tower. Round Towers were built between the 9th and 12th centuries, this is one of the finest, if late, examples of this type of structure in Ireland. It rises in three steps to a height of just over 29m. We continue our trail onto Goat Island. Take the unsigned road opposite the Round Tower. Follow this country road until you reach a junction where you take the first left, which is signposted for Goat Island, beach and rock fishing. Your route carries on down the windy lane to the sandy cove at Goat Island. Retrace your trail and follow the signs for Whiting Bay.

If you would like to extend your trail you can visit the heritage town of Youghal, Midleton Distillery, Cobh or Fota Island. If you prefer you can return on the N25 to Dungarvan, en route you will pass some quaint pubs, which will provide you with Irish music, song and dance most nights of the week. Keep an eye out for the memorial to Mayor Daly of Chicago on the right-hand side of the road after Kiely’s Cross Pub. More detailed information from A Walk Around Ardmore and the Ardmore Journal on sale locally.