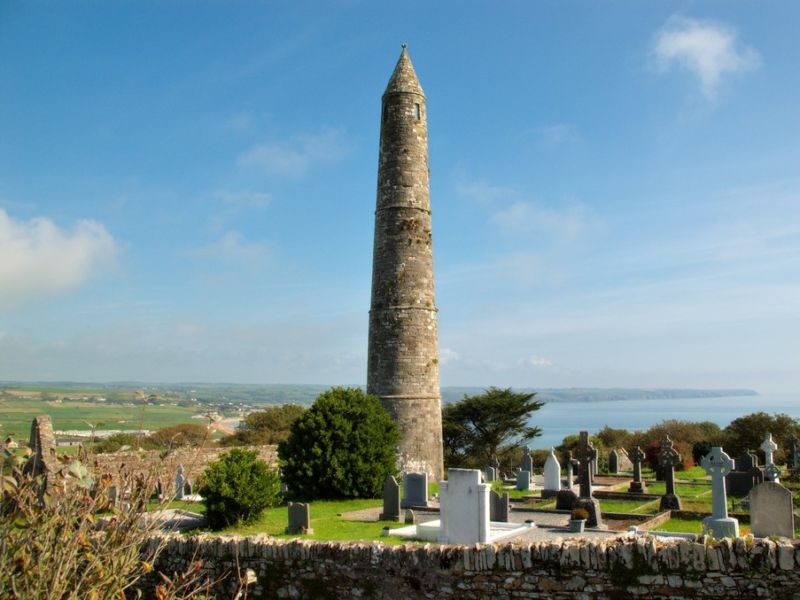 The Ardmore Cliff walk takes you around Ardmore Head and Ram Head passing the shipwreck known as Sampson. On your right you will see the coastguard station (1867), the castle (1867), the lookout post, used for observation during World War II, and Father O’Donnell’s Well. Now the path follows a series of bends away from the sea and arrives, via a gate, at the end of the lane. Follow the road up to a T-junction and continue straight on until you reach the 12th-century Round Tower. Round Towers were built between the 9th and 12th centuries, this is one of the finest, if late, examples of this type of structure in Ireland. It rises in three steps to a height of just over 29m. We continue our trail onto Goat Island. Take the unsigned road opposite the Round Tower. Follow this country road until you reach a junction where you take the first left, which is signposted for Goat Island, beach and rock fishing. Your route carries on down the windy lane to the sandy cove at Goat Island. Retrace your trail and follow the signs for Whiting Bay.

YouTube Video: Tracks and Trails broadcast in June 2013 on RTE ONE Ardmore and Waterford’s Copper Coast in Tramore. To view, Click Here.