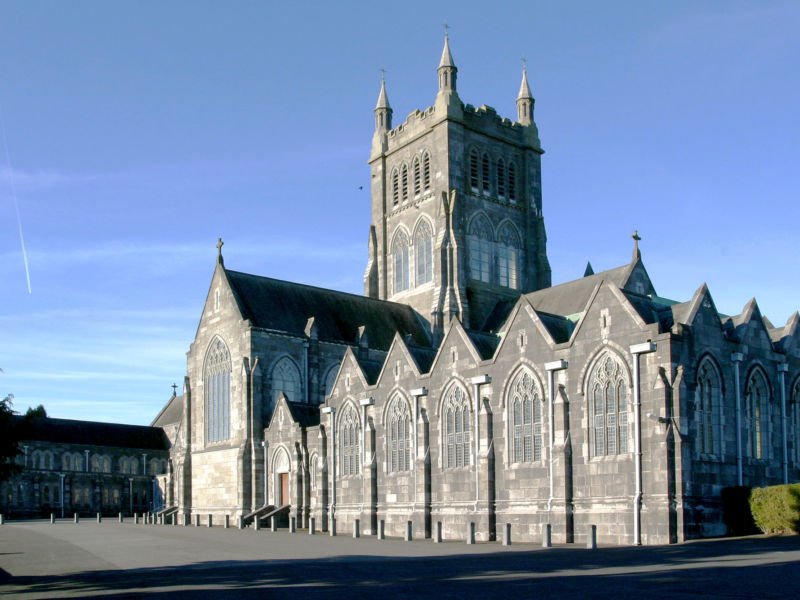 The West Waterford Monastic Trail follows a circular route, which begins by the coastal village of Ardmore and travels right into the heart of West Waterford’s scenic countryside.

Ardmore Cathedral
The 12th-century Round Tower at Ardmore is one of Ireland’s finest monuments to Irish monastic life. It rises in three steps to a height of just over 29 metres (97 feet) and is divided on the outside into four stories marked off by projecting string courses. The entrance doorway is some 4 metres above ground level. The purpose of the Round Tower was to serve as a belfry, as a place of refuge for the ecclesiasticus and for the safe custody of their books, chalices, shrines and relics. The west gable of the cathedral is on the site of St. Declan’s Monastery. The present building is of various periods and many styles. The chancel being the oldest dating from the 9th century, with the nave being late 12th century. Further work on the southside wall and the east gable are from the 14th century. The external figure-filled panels on the west gable of the nave must be one of the most striking feature of the whole cathedral and date from the 9th to 11th centuries.

St. Declan’s Oratory
The Beannchán is the oldest building in the graveyard, it is possibly 8th century. The upper wall and roof were restored by Bishop Mills in the 18th century. According to tradition here lies the grave of St. Declan. Generations of the faithful have scooped out the earth from the saint’s grave as it is believed to protect them from disease.

To continue on the monastic trail we leave Ardmore on the R673 heading for Clashmore. When you reach the N25, turn left towards Cork. Turn right at the signpost for Clashmore on the R671. This lovely corner of West Waterford is undiscovered and yet is just a mere 3 miles off the N25. The village has rested beside the River Blackwater since early Celtic days. It is believed locally that one of the first abbeys in Munster was established at Clashmore on the site of the old graveyard. At the dissolution of the monasteries in 1602, the abbey and lands were passed to Sir Walter Raleigh. A Protestant church was built on the site in 1818 at a cost of £830 15s 11d. There are many scenic walks in the area, one of which is 8 km long. It has many historic features including an ice lough and ice houses.

Molana Abbey
The trail now takes us to Molana Abbey. Return to the junction with the N25 and turn right towards Cork. When you reach Youghal Bridge cross it and turn right immediately, signposted the ‘The Scenic Route’, this road runs parallels to the Blackwater. The first right turn leads onto a short narrow lane beside which is the ruin of the medieval castle of Rhinecrew, built by the Knights Templar, together with an old church and graveyard. Continue on the scenic route, to the right you will see wide brick pillars, which lead to the estate of Ballynatray. There is access through the estate to the ‘island’ of Molana Abbey, now joined to the mainland by a causeway, built in 1806 by Grice Smyth. Visitors are welcome to Molana Abbey. A monastery was founded here in the 6th century by St. Macbanfaidh and was refounded for the Canons Regular of St. Augustine towards the close of the 12th century. The church contains some fine lancet windows, while the chapter room is said to be the last resting place of Raymond LeGros, who came with the first wave of Anglo-Norman conquerors and died in 1186. Molana Abbey was a powerful influence throughout Ireland from about the 6th century. Ballynatray estate occupies much of the parish of Glendine and contributes to the unique beauty of this wooded area. Just a few miles away is Kilcockan with its ancient churchyard and cemetery. The church was probably established in the 6th century and was clearly connected with the monastery at Molana. The Kiely vault in Kilcockan is the longest, but by no means the oldest of the tombs or graves in this ancient place. People have been buried around this church for the best part of 1500 years. From about the year 1200, Kilcockan was served by the Augustinians, and this was to last until the 1540s when King Henry VIII dissolved the monasteries throughout Ireland.

Knockanore
We continue on the trail to Knockanore following the scenic route. The narrow road dips and climbs to a point where a lovely sweep of the Blackwater meets with the River Bride and you can see the Knockmealdown Mountains in the distance. As you pass Strancally Quay with its castle on your right and then Headborourgh House on the left follow the signpost left for Tallow. Just a mile along this road you will see a sign for Knockanore Farmhouse Cheese. Using the milk from their own herd of cows they make a distinctive semi-soft type of farmhouse cheese.

Tallow
On to Tallow this delightful country town nestles in the valley of the River Bride surrounded by mountains, rivers and rolling hills. It has a vibrant and rich community life with both adults and children having many sporting, cultural and educational opportunities. Well-known people with connections to the town are Mick McCarthy, Ireland’s soccer manager, whose late father Charlie was born and raised in Tallow. The Carmelite sisters hold a special place in the heart of all Tallow people.

The Carmelite Convent, Tallow
In July 1836, five Carmelite sisters left their convent in Dublin and undertook a three day journey by Bianconi carriage to Tallow on the River Bride. Their mission was to bring the Carmelite presence to the south. The sisters taught in the school until 1910. Once theschool was established the nuns reassumed their life of prayer as an enclosed contemplative religious order. However, the contribution they had made to the community lived on in the memories of their pupils. During the Famine in 1847, the sisters provided soup and whatever support they could to the starving. Their lacemaking school was famous and it helped support local families. In 1997, a new convent built on the old site, was opened. It is dedicated to St. Joseph.

St. Mary’s Abbey, Glencairn
Continuing on our trail we now visit the Cistercian nuns at St. Mary’s Abbey, Glencairn. Glencairn is about 3 miles from Lismore on the banks of the River Blackwater. Cistercian nuns seek God and follow Christ in a life of prayer and work. The community meet seven times a day in the church. They celebrate the Eucharist daily. Through their work they support themselves and have something to share with the poor. They earn their living chiefly from their dairy farm and from the manufacture of Eucharistic bread. Some sisters are engaged in arts and crafts work, and the production of greeting cards. Many people visit the abbey. They have a small guest house for anyone who wishes to make a retreat, or who is searching for some peace and quiet. All are welcome to join them in prayer. We leave their abbey and follow our trail to Lismore.

St. Carthage’s Cathedral
St. Carthage’s Cathedral lies beyond tall Gothic gates at the end of an avenue. The first stone church on this site was built about 1207, but the present church dates from 1630, when the Earl of Cork had the building restored. The pointed windows and ribbed ceilings were inserted by Sir Richard Morrison around 1820 and a superb tower and ribbed spine were added by the Pain Brothers in 1827. An interesting library is attached to the cathedral. The remarkable table tomb of the McGraths dating from 1485, is also worth viewing. In the graveyard there are many other old and interesting gravestones. Retrace your steps back along the avenue and join the junction with Main Street from here we take the trail to Cappoquin and then onto Mount Melleray Abbey. Follow the signs from Lismore to Cappoquin.

Mount Melleray Abbey
Once you reach Cappoquin follow the signs for Mount Melleray Abbey, on the way you will pass a grotto where, it is said, the Virgin Mary appeared to two young boys. Mount Melleray Abbey was founded in the year 1833 by Irish Cistercian monks, who had been expelled from the Abbey of Mellerey in France, during the troubles that had accompanied the accession of Louis Philippe to the throne. They were given land by Sir Richard Keane, Bart of Cappoquin, which they reclaimed from its wild state and on which they built the monastery. This monastery grew to 140 monks in the 1950s, but has since declined in numbers. Those who wish to take time for contemplation can stay in the guesthouse in the grounds. Return to Cappoquin and follow the signs for Dungarvan.

St. Augustine’s Abbey
The last steps on the monastic trail takes us to Dungarvan. Follow the signs for Abbeyside and St. Augustine’s on the N25 by-pass. The Augustinians came to Abbeyside in 1290, from the Clare Priory in Suffolk, having been invited by their patron, Thomas, Lord Offaly. The abbey buildings were ruined after the Cromwellian attack on Dungarvan. A well-preserved tower and nave, which had a large east window can be seen. The present Catholic church was built on the foundations of the abbey and it incorporates fragments from it including the coat of arms on the west wall.